October 17, 2015 / Christopher Kelly / Comments Off on Papal Invasions and the Pope’s Machine Gun!

The most recent major Italian “Invasion” of America, entirely friendly and widely welcomed, was launched this week by Pope Francis as he clambered down his Alitalia jet at Andrews Air Force Base.  Some may object that Pope Francis is Argentine and that is true.  But he is also deeply Italian.  As we point out in the Argentinian chapter of our forthcoming book, Italy Invades: How Italians Conquered the World, Pope Francis is ethnically Italian-Argentine.  Thus Pope Francis himself is the product of an Italian Invasion.  In his Rose Garden address delivered on September 23, 2015 he was quick to point out that he too is a son of immigrants — like so many Americans.

The Pope is the Vicar of Christ and Christ is the Prince of Peace.  So we can expect the Pope to advocate on behalf of peace in our world. 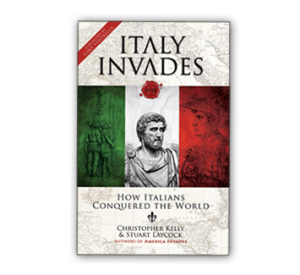 But we should not forget that the papacy once wielded tremendous secular power and has, in fact, launched many real invasions.  We wrote in the Introduction to Italy Invades…

“Many popes based in Rome directed Christians to embark on crusades to the Holy Lands. Alexander VI, a Borgia pope, imposed the Treaty of Tordesillas, which split South America into Spanish and Portuguese bits in the fifteenth century. The Papal States had their own armies for many centuries. Pope John Paul II, with his special insight into Eastern Europe, helped to steer the West to victory in the Cold War.”

Indeed the papacy did not give up its secular powers without a fight.  And that fight was with the Italians.  In the Vatican City chapter of Italy Invades we wrote…

“During the Franco-Prussian War in 1870, Napoleon III, desperate to defend France, was compelled to withdraw the French garrison from Rome. King Victor Emmanuel II saw his chance to fulfill his long- cherished dream of capturing Rome.

When Pope Pius IX, whom a conclave had declared infallible the same year, was presented with a demand that he submit to the protection of the Kingdom of Italy, he exploded, “Fine loyalty! You are all a set of vipers, of whited sepulchres, and wanting in faith.” The Pope’s Army was outnumbered six to one by the Italian forces, who also threatened to bombard Rome with a navy. The pope knew that all was lost but refused to submit without “a bit of resistance” to show the world that he acted under duress.

On September 11, 1870, the Italian Army, not just irregulars of the Garibaldini, finally began an invasion of the Papal States. The defending papal forces were, in some sense, surprisingly well equipped with the latest weaponry. Their infantry were armed with the breech-loading Remington model 1868. Their leader, General Kanzler, was competent and had been the victor of the Battle of Mentana just three years before.

The papal forces were one of only three armies in the world at the time (along with England and France) that were equipped with a Claxton gun, a forerunner of the machine gun. This type of gun had been invented by an American—F. S. Claxton—and featured six horizontally mounted 25mm canons. A Claxton gun, likely of Belgian manufacture, was concealed in one of the towers of the San Giovanni gate. But even the pope’s machine gun could not save Rome.

By September 18, the Eternal City was surrounded. Italian forces, led by General Cadorna, had orders to attack anywhere in Rome except for the Leonine City, which included the Vatican and the Castel Sant’Angelo. No one wished to see an artillery shell land on St. Peter’s Basilica or wound the Holy Father.
The battle for Rome was fought on September 20. Thirty-two Italian soldiers were killed, along with twelve in the papal army. At last, Rome was Italian.”

Pope Francis in the 21st century is a Pope of a very different stripe who has no machine guns.  And even if the Holy Father did have a machine gun it would be loaded with benedictions and candy for the children!

Posted in From Commander Kelly's Page